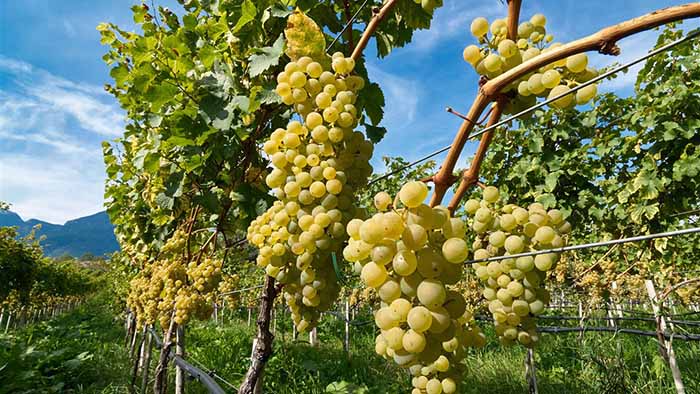 Drip irrigation is a water-saving and efficient irrigation technology which has developed rapidly in recent years. Drip irrigation is a method of slowly transferring water to crop root zone by dripping. In the past, drip irrigation mostly used microtubular drippers, one end of which was fixed on the branch pipe of the water pipeline and the other end was placed near the root zone of the crop. Because this kind of micro-tube emitter is very thin, it is easy to clog, especially in many areas of northern China, the water quality is relatively hard, containing a large number of calcium and magnesium ions, which is prone to clogging; in addition, the uniformity of the emitter is poor. In recent years, plastic film ribbon hose has been used, which directly perforates the water, the water is more uniform, and easy to install, low cost, 1 – 2 years replacement, very suitable for vineyards.

The main advantages of drip irrigation in vineyards are:

2. Drip irrigation has little effect on land use.

Temperature dropper irrigation water volume is less, and it is not a one-time irrigation in a short time, so the direct impact on ground temperature is small. Moreover, drip irrigation is to irrigate water in the underground root area, the amount of surface evaporation water is small, which reduces the heat consumption of soil evaporation. Therefore, the ground temperature of drip irrigation vineyards is generally higher than that of traditional surface irrigation, so grapes grow faster and mature earlier. This is more significant in protected cultivation.

Drip irrigation is to supply water to the soil by drip infiltration, which will not cause damage to the soil structure.

The relative humidity of air around the vineyard canopy decreases by about 10% compared with surface irrigation, which greatly reduces the occurrence and spread of diseases and pests.

5. Reduction of some diseases transmitted by irrigation water

Especially the chances of transmission and reinfection of root cancers.

Drip irrigation is a semi-automatic mechanical irrigation method. When installed drip irrigation equipment is used, it can be self-irrigation as long as the valve is opened and the appropriate pressure is adjusted.